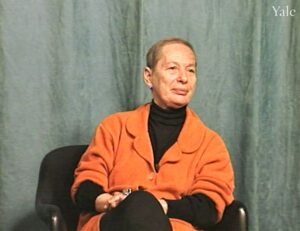 Lydia Aldewereld was born in the Netherlands in 1931. She recounts living in Brussels from nine months of age; observing Jewish customs in their liberal home; her father's anti-Fascist activities; German invasion; a warning to leave due to her father's activities; fleeing with her parents and sisters through France; her father's opportunity to emigrate to England; his refusing to leave his family in Biarritz; living in a monastery with her mother and sister in Toulouse; a brief stay in Paris; living in a nearby refugee center for Dutch citizens (her father was the director); traveling to Lisbon, then Madrid; traveling by ship to Jakarta via Maputo and Durban; arrival on November 8, 1941; placement in a refugee camp until December 1; placement with her sister with a local family (their parents were placed elsewhere); her father's military draft; living with her sister in Bogor; Japanese invasion; return to Jakarta with their mother; placement in a Japanese concentration camp in Tjideng; learning her father was a POW; their transfer to a camp near Jakarta; lack of sanitation and food; slave labor; prisoners dying from malnutrition and illness; transfer to Tjideng, then a punishment camp; increasingly harsh conditions; transfer to Tangerang; religious instruction from a Jewish teacher; observing Jewish holidays; a large group of Iraqi Jewish prisoners; transfer to another camp; her severe illness; losing her will to live; assistance from a prisoner nurse; liberation in September 1945; and joining her father in Singapore in November.