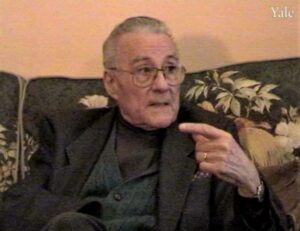 Roger Bertholet was born in Brussels, Belgium in 1921. He recounts attending school; working as an accountant; contact with Jewish refugees fleeing to the United States; German invasion; military draft; service in France; capture by Germans; escaping with others; returning to Brussels; his father's participation in the underground; notification of his draft for labor in Germany; hiding; observing a killing of Jews from his hiding place; remaining in hiding despite obtaining false papers; liberation by British troops; joining a Belgian section of the British army; assignments in Germany and Belgium; demobilization in 1946; marriage; and his son's birth. Mr. B. discusses many friends and relatives who assisted Jews; visiting Dachau in the 1950s; and reunions with fellow soldiers. He shows photographs and drawings.