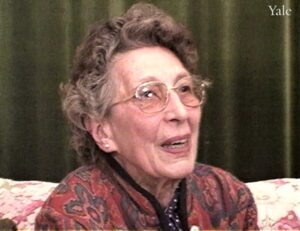 Yvonne Broche was born in Pipaix, Belgium in 1918. She recounts attending public school; completing advanced degrees in nursing school in Tournai; mobilization as a nurse; assignment to a military hospital in Nieuwpoort; evacuation to Avilley, Nantes, then a village in France; caring for a friend's five young daughters; transfer to Rochefort; working as a head nurse; returning to Belgium two months later; working at a hospital; hiding resistance members; the Red Cross and a local nobleman arranging for them to hide Jewish children; helping transport twenty-one Jewish children from Ath; hiding a Jewish physician; receiving supplies from the Red Cross; a German raid in 1944; hiding some of the children but having to surrender others; and liberation by United States troops. Ms. B. notes her brothers' participation in the Resistance; never being able to learn the fate of the children who were taken; saving over one hundred Jewish children in the hospital; and continuing contact with some of them.