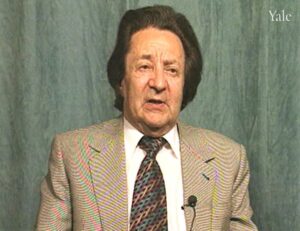 Abram Cymberknoff was born in Piotrków Trybunalski, Poland in 1922, the oldest of four children. He recounts moving to Będzin when he was eleven; his father's privileges and high status due to heroic service in the Polish military; attending Jewish and public schools; antisemitic harassment; participation in Betar; German invasion; anti-Jewish restrictions; slave labor assignments; deportation to Klein Mangersdorf in fall 1940; slave labor building roads; transfer nine months later to Gross Sarne; privileged work in the kitchen; transfer to Blechhammer; privileged work assisting an architect; hospitalization; transfer to a hospital in Sosnowiec; escaping; returning home; his family hiding him; surrendering at his father's suggestion so hostages would not be killed; deportation to Annaberg; sorting belongings of deported Jews; trading a watch for food; slave labor in a factory; learning his brother was in Neukirch; trading places with someone to join him; doing his brother's work since he had severe frostbite; their transfer to Markstädt; his brother's hospitalization and deportation (he never saw him again); severe depression and emotional problems after the loss of his brother; slave labor for Schallhorn AG; transfer to Gross-Rosen; a Russian prisoner stealing his shoes, then returning them when he did not report the theft, thus saving his life; the Russian providing him with extra food and assistance; transfer to Fünfteichen; hospitalization after being struck by lightning; special care by a doctor who had known his father; liberation; searching for family in Będzin, Walbrzych (Waldenburg), and Ornowo; contacting the Red Cross, hoping to find his family (none survived); visiting an aunt and uncle in Brussels; hospitalization; returning to Piotrków; and emigrating to Belgium. Mr. C. describes details of camp life including being forced to sing for officials, beatings, the image of his father giving him hope, assistance from some prisoners and mistreatment by others, and nightmares that continue to the present time. He discusses sharing his experiences with his daughter when she was fourteen; writing about them; continuing hostility toward Germans and Poles; and visiting Auschwitz.