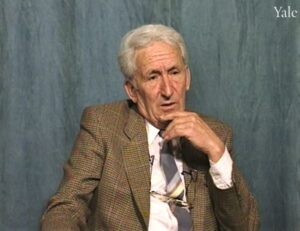 Jean-Michel Darchambeau was born in Oran, Algeria and raised in Belgium. He recalls his parents' divorce (his mother was Catholic); a close relationship with his grandfather; working in Liège; marriage; imprisonment for resistance; escaping; he and his wife being sent for forced labor in Nuremberg; her release after two weeks (she was ill); going on leave (he never returned); his wife's death in 1942; living underground in Paris; arrest while trying to escape to England; imprisonment in St. Gilles; suffering greatly in solitary confinement; clandestinely sending a message to his family; transfer to Dachau; a friend receiving extra food for "volunteering" for medical experiments; incredible solidarity and friendship among his Belgian group; hospitalization for typhus; receiving packages from home; liberation by United States troops; and repatriation. Mr. D. discusses never sharing his experiences with his family; fighting to receive benefits as a camp survivor (his forced labor in Germany counted against him); never believing he would survive Dachau; believing he and his fellow prisoners are permanently depressed as a result of their camp experiences; and visiting schools to share his experiences.