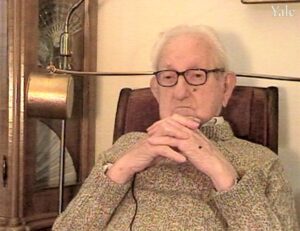 Abraham De Groot was born in Antwerp, Belgium in 1907, one of three children. He recounts his father's profession as a master diamond cutter; the family moving to Amsterdam in 1907; their assimilated lifestyle; returning to Antwerp in 1928; training with his father as a diamond cutter; joining Maccabi and a non-sectarian sport club; marriage; the birth of a son; his wife's death from illness in 1939; living with his parents so his mother could care for his son; German invasion in 1940; obtaining papers as non-Jews; his parents going into hiding; moving to Brussels where no one knew him; arrest with his brother in April 1943; their imprisonment in St. Gilles; transfer to Malines; never identifying themselves as Jews; deportation about four weeks later; escaping with his brother and three others from the train; returning to Brussels via Louvain; joining his parents; a non-Jewish neighbor, to whom they had given their business, bringing them money weekly; learning after the war that his sister, her children, and most of his extended family had been killed; marriage to his second wife; and the births of two daughters. Mr. D. attributes his, his brother's, and parents' survival to luck and notes not believing in God due to seeing such misery.