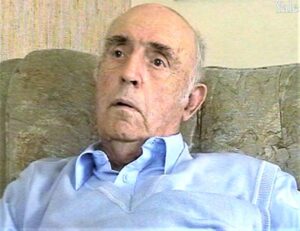 Marius Deheegher was born in Poperinge, Belgium in 1930. He recalls attending officer training school in Antwerp beginning in 1939; capture by the Germans; incarceration in Kortrijk; deportation as a POW to Germany; returning to Kortrijk; joining the resistance in Merkem; arrest in May 1942; solitary confinement in Kortrijk for four months; reading the Bible; transfer to St. Gilles for two weeks, four days to Essen, then to Bochum; slave labor cutting patterns for shoes; Allied bombings in May 1943; transfer to Esterwegen; receiving a Bible from another prisoner; transfer to Börgermoor for a month, back to Esterwegen, then Gross Strehlitz; transfer in October 1944 to Gross-Rosen; slave labor doing construction; transfer to Dora in February 1945; encountering a friend from school; his friend arranging his hospitalization for six weeks; a doctor from Normandy caring for him; transfer to Nordhausen at the end of March; escaping with three others; liberation by United States troops; evacuation to Dora; repatriation via Paris; assistance from the Red Cross; and a two-year recuperation from tuberculosis. Mr. D. discusses the importance of his religious faith to his survival; the camp hierarchy and national groups; and continuing health problems and nightmares resulting from his experiences.