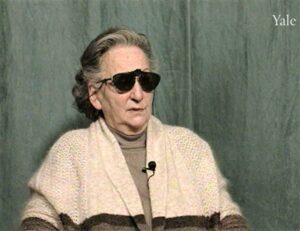 Lea was born in Rome, Italy in 1925, one of four children. She recounts her family moving to Anzio in approximately 1927; her parents' positions as school teachers; moving to Rhodes in 1936; her father serving as director of the Jewish school; his death; her mother taking his position; she and her older sister teaching there; her brother having to work at age thirteen; food shortages; German occupation; round-up of all Jews; deportation with her family by ship to Piraeus, then by train to Auschwitz/Birkenau; separation of men and women; separation with her sister from their mother, grandmother, and baby brother (they never saw them again); initially not believing what they were told about the crematoria; slave labor weaving plastic and carrying bricks; speaking with her brother a few times through the barbed wire; several hospitalizations; strained relations between Polish and Italian prisoners; losing her belief in God; abandonment by the Germans in January 1945; liberation days later by Soviet troops; placement in a sanatorium with her sister and two other women from Rhodes; repatriation to Rome in August; learning her brother had been killed; staying with their aunt; working in a Jewish orphanage; and marriage to a survivor from Rhodes. Ms. F. discusses nightmares resulting from her experiences and not sharing her stories with her children.