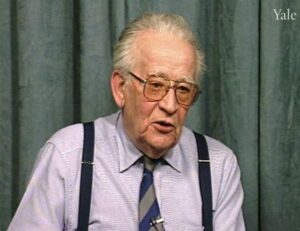 François Janssens was born in Brussels, Belgium in 1914. He recalls attending Catholic schools despite his and his parents' secularism; training, then working as a tailor; German invasion; traveling to Dunkerque with a friend, hoping to enlist; returning to Brussels; his uncle's open work in the Resistance; his own participation; marriage; his uncle's arrest, revelation of their network, and his arrest in 1943; incarceration in St. Gilles for ten months; designation as "Nacht und Nebel" (NN); transfer with about one hundred Belgians to Essen, Vechta, then Kaisheim; working as a tailor; transfer to Dachau; shock at seeing piles of corpses; dehumanization and learning to accept death; their protected status as NN; observing a child with his hands surgically grafted to his abdomen, the result of specious Nazi medical experiments; solidarity within his group; his hostility towards the privileged prisoners who “ran the camp”; liberation by United States troops; hanging a German; repatriation to Lie?ge; a welcoming party which they could not enjoy due to their weak physical and emotional condtion; returning to Brussels with Red Cross assistance; and slowly recovering, both physically and psychologically. Mr. J. notes learning about the scope of the atrocities and killings only after liberation; lasting friendships formed in prisons and camps; nightmares and character changes resulting from his experiences; not sharing them with his wife and son; and belonging to a Dachau survivor organization.