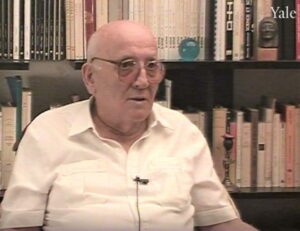 Emil Lakatos was born in Berehove, Czechoslovakia (presently Ukraine) in 1920, one of four children. He recounts attending cheder; emigration with his family to Antwerp in 1930; moving to Brussels; attending a Flemish school; cordial relations with non-Jews; his bar mitzvah; participating in the Young Socialists (JS); participating in a meeting in Louvain to unite socialists and communists; arrest at an anti-Rexist demonstration; release; briefly fleeing to France; apprenticeship as a tailor; German invasion; fleeing with his family to France; his aunt's death and his father's and brother's serious injuries in the train's bombing; returning to Belgium; joining the Resistance; living under false papers; hiding his parents with non-Jews; leading a group of Hungarian resistors; his brother's arrest and execution; his Resistance group blowing up trains, a military movie theater, pro-Nazi cultural organizations, and Nazi sympathizers; arrest in April 1944; never admitting anything under torture, including that he was Jewish; three months solitary confinement in St. Gilles; deportation to Neuengamme in September; receiving a Red Cross package; transfer days later to Schandelah; slave labor laying rail tracks; hospitalization; working in the infirmary; priests conducting clandestine Masses; escaping from a train transport in April 1945; liberation by United States troops; repatriation via Paris with assistance from the Red Cross; testifying in trials of collaborators; a six-month convalescence in Switzerland; assisting in disarming the Resistance; participating in the Communist party; moving with his family to Budapest in 1948; changing his name to appear more ethnically Hungarian; serving in the Communist party's central committee; the 1956 uprising; and several postings in other European countries. Mr. L. discusses the camp hierarchy and relations among prisoner groups; the importance of encouraging each other and sharing food to survival; his observations on Hungarian and Soviet politics; and participating in a survivor organization.