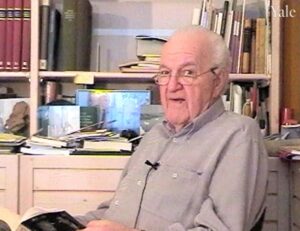 Herman Liebaers was born in Tienen, Belgium in 1919. He recalls his father's commitment to Marxism; his parents' divorce when he was thirteen; attending schools and universities in Brussels, Charleroi, Ghent, and Cologne; observing persecution of Jews in Germany; his mother assisting Jewish refugees; German invasion; biking to France; encountering his father; going with him to Limoges, Dijon, and Paris; returning to university in Ghent; arrest in 1943 for communist and union activities; imprisonment in Breendonk; meaningless forced labor; being forced to participate in the group beating to death of a Jewish prisoner who was caught escaping; transfer to prison in Huy; improved conditions; punishment when two men he supervised escaped; release; returning to Brussels; marriage; and his postwar career as a prominent librarian.