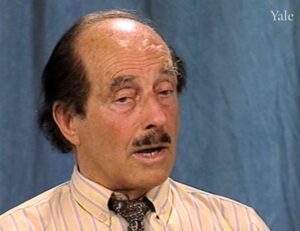 Alain Monczyk was born in Zawiercie, Poland in 1924, one of five children. He recalls his family's poverty; their focus on religion and learning; one sisters's death from tuberculosis; attending Jewish schools; antisemitic harassment and violence; futile efforts to emigrate; working as a furrier; German invasion; forced labor; food shortages; his mother's death; ghettoization; deportation to Annaberg; slave labor building roads; observing Soviet POWs in very poor condition; transfer to Sakrau, Faulbrück, Görlitz, then Gross-Rosen; slave labor building factories as well as other tasks; sharing extra food and helping others in his group of friends; transfer to Hersbruck in February 1945; hospitalization; transfer to Dachau in April, then placement on a train through Bavaria; abandonment by the SS guards; liberation by United States troops; transfer to a displaced persons camp; learning his brother was in Paris (his father and sisters had been killed); joining him there; marriage; and moving to Belgium. Mr. M. discusses the courage of religious Jews who did not resist; competition between camp prisoners to survive; visiting Auschwitz; and not understanding why he survived. He reads his poem about his experiences.