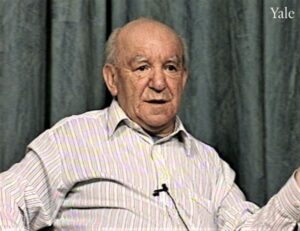 Szapsia Salomonowicz was born in Tomaszow Mazowiecki, Poland in 1925 the oldest of four children. He recalls his large, close extended family; antisemitic violence; his father's military draft in 1939; German invasion; briefly seeing his father with other POWs; learning he had been murdered in a mass shooting; his mother sending him to his great aunt; forced labor; a brief visit to his family (he never saw them again); deportation of his aunt and relatives; living with his cousin in a ghetto; a non-Jewish worker providing him with extra food; friendship with two prisoners; sharing food with each other; transfer to Cze?stochowa; slave labor in a munitions factory; transfer to Buchenwald, then Dora in January 1945; hospitalization; surgery; his friends helping him; transfer to Bergen-Belsen; being shot while stealing food; his friends keeping him alive (he is blind in one eye from the injury); liberation by British troops; living in Celle displaced persons camp, Munich, Feldafing, and Bergen-Belsen; reunion with a cousin; emigration to Brussels in February 1946; marriage in 1948; teaching his son Yiddish, but not about Judaism (he lost his belief when his family was killed); living in Melbourne; and returning to Belgium. He discusses strong bonds with concentration camp friends.