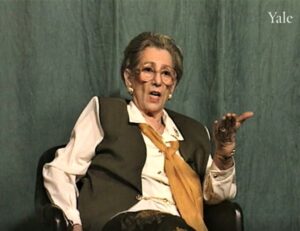 Lily Thonet was born in Sampont, Belgium in 1921, the elder of two sisters. She recounts living with her maternal grandparents in Arlon; attending a Catholic boarding school from age ten; volunteering for the Red Cross in 1939; German invasion; helping the wounded; her father's involvement in the Resistance; distributing Resistance literature; arrest with her parents in November 1943; incarceration with her mother in Arlon; their transfer to St. Gilles; violent interrogations at Avenue Louise; their trial; her release in November, but not her mother's; living with an aunt; re-arrest with her aunt in August 1944; their deportation to Ravensbrück in March; volunteering for slave labor in a sewing factory to avoid the cold; sabotaging the work; becoming inured to pervasive death and corpses; a friend's singing raising their morale; praying frequently; she and a friend arranging a clandestine Mass at Christmas; transfer by the Swedish Red Cross to Malmö; being wounded when Allied planes strafed the bus; hospitalization in Markaryd; repatriation; reunion with her mother who had been in Ravensbrück, though she never saw her there; learning her father and sister's husband had been killed; and marriage in 1948. Ms. T. discusses the importance of faith, luck, and being with her aunt to her survival; the prisoner hierarchies; reliving painful memories for many years; the limitations of language to express the truth of the camps to those who did not experience them; participating in the Ravensbrück association; and sharing her experiences with her son.