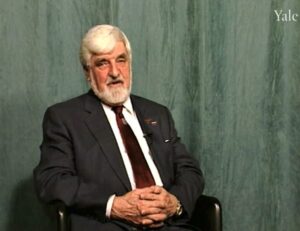 Jan Vanden Eynde was born in Rumbeke, Belgium in 1922, the oldest of three children in a religious Catholic family. He recounts living in Louvain from age three; attending Catholic school; participating in Scouting; German invasion in May 1940; traveling with his cousin to Tournai, then Rouen to enlist; being shipped by train to Anduze, France; repatriation about six weeks later; living briefly in Tongeren; priesthood training in monasteries in Bocholt for two years, in Gits for two years, then in Thy-le-Château; arrest in July 1944 with thirteen others from the monastery for listening to the BBC; incarceration in Charleroi; deportation by cattle car to Neuengamme in September, then transfer to Blumenthal a few days later; slave labor in a submarine factory; sabotaging the work; a beating for foraging parts to create a hotplate; hospitalization for ten days; praying and attending clandestine Masses; a public hanging; transfer to Farge in late winter; a death march, then train transfer back to Neuengamme, then days later to Lübeck; transfer to the ship Cap Arcona, then another ship; debarkation; liberation by British troops; living with Germans in Neustadt; repatriation; hospitalization for typhus; a long recuperation, including time in a sanatorium; leaving the priesthood (he had never taken his vows); marriage; participating in a Neuengamme survivors organization; living in Africa with his wife and children for thirty-six years; and their return to Belgium in 1986. Mr. V. details the impact of extreme starvation and cold; camp hierarchies and group relations; trusting only his monastery group, including Marcel B.; nightmares resulting from his experiences; continuing his Catholic beliefs and practices; and a monument at Thy-le-Château to those deported, of whom four of fourteen survived.