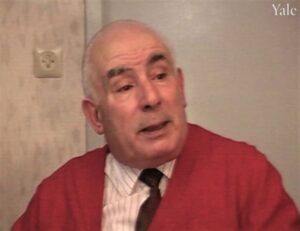 Nunzio Vella was born in Serradifico, Italy in 1924, one of eight brothers. He recounts learning fascist doctrine in school; military draft in 1943; postings and training in Cervignano del Friuli, then Pula; Italian capitulation; German occupation; declining to collaborate with the German military, resulting in prisoner of war status; transfer by ship to Venice, then by train to a camp which he thinks was in Austria; digging pits to bury the dead; transfer to Graz with other Italian POWs; assignments to various jobs in the area; good relations with local Austrians, some of whom gave them food; brief imprisonment for trading with locals; Allied bombings; forced labor in a tank factory; abandonment by the German guards; traveling with colleagues to Italy; hospitalization en route; reunion with his family; emigrating to join a brother in Brussels; and marriage in 1954. Mr. V. discusses nightmares while a POW which continue to the present. He shows photographs and documents.