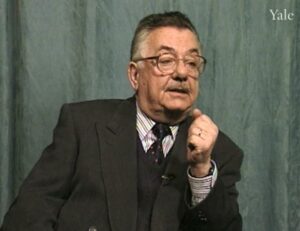 Victor Wilmotte was born in Belgium in approximately 1925, one of three brothers. He recounts living near Namur; his family's focus on religion, family, and patriotism; attending a Catholic school; participating in a Catholic youth group; German invasion; helping to bury Belgian soldiers; joining the Resistance in 1941; printing and distributing leaflets; obtaining weapons; a friend who worked for the Gestapo warning him of his imminent arrest; a futile attempt to escape to England via France; arrest in Buxy; interrogation and torture in Chalon-sur-Saone; transfer to Dijon a month later, then other locations ending in Hinzert; starvation and beatings by German guards; slave labor digging a large ditch and in a quarry; brief hospitalization; reassignment uprooting trees; being beaten for taking food scraps; transfer to Wittlich six months later; improved conditions; receiving a Red Cross package; train transfer to Breslau (Wrocław) prison; learning he was a Ã¢â‚¬Å“Nacht und NebelÃ¢â‚¬ï¿½ prisoner; slave labor in a sugar refinery, part of Gross-Rosen; a show trial; transfer to Schweidnitz; a week's solitary confinement for reading a newspaper; assistance from fellow prisoners; a death march to Hirschberg; liberation by Soviet troops; repatriation via Bamberg; reunion with his family; working as an interpreter for United States troops; marriage in 1948; and his family of six children. Mr. W. discusses the importance of his faith and moral support among prisoners to his survival; attending Mass in one camp and his own short prayers; nightmares resulting from his experiences; his grandchildren's interest in his story, in contrast to his children's disinterest; and frequent meetings with fellow prisoners through their organization.