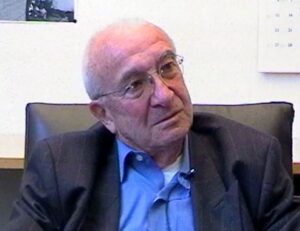 Michal Wolf was born in Kalisz, Poland in 1926, the younger of two sons. He recounts his family's emigration to Antwerp in 1929; their move to Liège two years later; their orthodoxy; attending school; his bar mitzvah; working in his father's bakery; registering as Jews with the Nazis; deportation with his brother to Dannes-Camiers in August 1942; slave labor building military defenses; learning his mother had been deported and his father was in a tuberculosis sanitarium; brief transfer to Malines in October; escaping with his brother from a deportation train; assistance from locals; walking to Tongeren, then Liège; contact with the underground; visiting his father; receiving false papers through a priest; living with a non-Jewish family in Liège; his brother escaping to England and joining their military; liberation by United States troops; reopening his father's bakery; his brother and father emigrating to Israel; marriage to the daughter of an Auschwitz survivor, from whom he learned his mother had been killed there; his father's death in a terrorist attack in 1950; and his son's birth. Mr. W. discusses his good fortune being in a camp only three months; his and his father rejecting orthodoxy after learning his mother had been killed; and not sharing his experiences with his sons until their recent interest in them. Mr. W. provides copies of letters written to his father during the war.