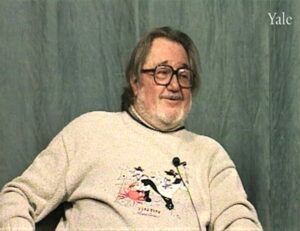 Haïm Averbuh was born in Chișinău, Romania in 1923, one of three children. He recounts his family's move to Antwerp in 1929 due to antisemitism; attending Jewish and public schools; participating in Betar; his father's death in 1933; German invasion; fleeing with his brothers to Boulogne; doing farm work for a few weeks; returning home; living as non-Jews; several menial jobs; arrest with his family in 1943; imprisonment for several weeks; transfer with his family to Malines; deportation in cattle cars; separation from his mother (he never saw her again); arrival in Buchenwald; becoming inured to death all around him; slave labor in a quarry, as a bricklayer, and an electrician; transfer with his brothers to Tröglitz six months later; solidarity within his small group; escaping with his brothers from a train transport; posing as non-Jewish Belgian forced laborers; liberation by United States troops two weeks later; repatriation to Liège in May 1945; interrogations to confirm they were Belgians; returning home; and establishing a business with his brothers. Mr. A. discusses not sharing their experiences because no one believed them; sharing them with his second wife; visiting Auschwitz with her; nightmares, insomnia, and loss of belief in God resulting from his experiences; and participating in associations of former camp prisoners.