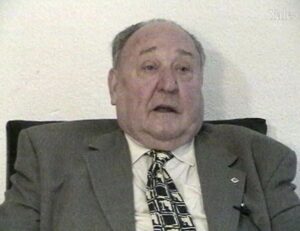 Pieter-Paul Baeten was born in Lier, Belgium in 1926. He recalls attending primary school in Lier, then secondary school in Bergen; German invasion; joining the resistance; distributing flyers and delivering weapons; meeting other couriers in school; delivering messages to Antwerp and Mechelen; meeting his future wife who was also in the resistance; arrest in 1944; imprisonment in St. Gilles; transfer a week later to Cologne, then a week later to Esterwegen; assignment to a youth barrack; older prisoners teaching them and making them toys; transfer to Gross Strehlitz; forced labor sewing mittens; sabotaging the work; transfer in November to Gross-Rosen; a prisoner being beaten to death for not removing his hat; slave labor carrying stones from the quarry; seeing Jews but not being able to interact with them; hospitalization for dysentery; meeting his former French professor who did not survive; transfer to Dora in open train cars in February 1945; hospitalization; a Czech prisoner arranging for him to be a nurse; liberation by United States troops in April; repatriation to Lier; returning to school; leaving due to ailments resulting from his experiences; and not sharing his experiences because others did not believe him. Mr. B. discusses the importance of luck and being with his friends to his survival; continuing nightmares; sharing his experiences with his children and grandchildren; and traveling with them to the camps and memorials.