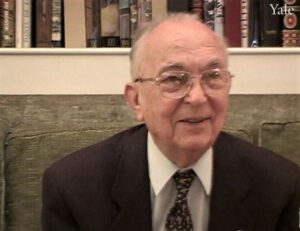 René Bauduin was born in Namur, Belgium in 1905, the elder of two sons. He recounts his father being killed as a soldier in the First World War; living with his grandparents in Limal; graduating from military school in Namur in 1924 as a cavalry lieutenant; marriage in 1931; his daughter's birth; serving in Limbourg; German invasion; retreat, then capture by German forces; release; returning home; recruitment by the Belgian secret army; moving to Brussels; working for the Red Cross; recruiting demobilized Belgian soldiers for the secret army; arrest in March 1943; incarceration in St. Gilles for six months; one interrogation; transfer to Breendonk; frequent beatings resulting in permanent damage; meaningless forced labor; transfer back to St. Gilles five months later, then to Essen and Esterwegen; slave labor sorting used shell casings; sabotaging the work; starvation; a priest clandestinely leading prayers; observing Christmas; attempts to maintain morale; transfer to Kaisheim, then Dachau; liberation by United States troops; helping identify Germans trying to hide among the former prisoners; repatriation; and his military career, including as a military attache in Paris. Mr. B. discusses camaraderie and friendships in the camps; satisfaction that those who tortured him in Breendonk were shot after the war; military honors he received; participating in organizations of former concentration camp inmates; and the importance of faith to his survival.