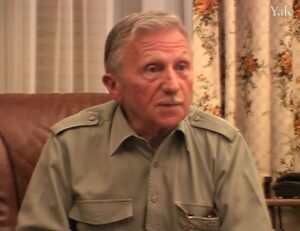 Maurice  Berdal a non-Jew, who was born in Jemappes, Belgium in 1924, the older of two brothers. He recounts his family's extreme poverty; working in a factory from age fifteen; German invasion in May 1940; briefly fleeing to France; the disappearance of local Jews; volunteering to work in a factory in Germany in 1943; an Allied bombing; rescuing a German woman from the rubble; receiving a two-week furlough as a reward; returning home; deciding to remain; hiding at his aunt's home; joining the Resistance; learning his father was active in the Resistance; hiding and transporting Allied soldiers, distributing guns and funds, and other activities; arrest; release due to his false papers; another arrest during which he was wounded and his colleague killed in July 1944; interrogation and torture; transfer to Namur; deportation to Neuengamme in September, then days later to Mauthausen; many deaths en route; slave labor carrying stones; transfer to Gusen; slave labor in a tunnel, a workshop, and repairing the crematorium; beatings; assistance from fellow prisoners; hospitalization; being subjected to medical experiments; public executions; observing cannibalism; transfer to Mauthausen's hospital; liberation by United States troops; hospitalization for a month; repatriation; three months in a Red Cross hospital; several surgeries over three years due to camp beatings and injuries; and marriage in 1953. Mr. B. discusses details of camp life; pervasive fear of beatings and death; contemplating suicide; prisoner hierarchies and intergroup relations, including harsher treatment of Jews; the importance of praying nightly and help from others to his survival; continuing nightmares; lack of understanding from those who were not in the camps; participating in a survivor organization; visiting Mauthausen; and awards for his Resistance activities. He shows a spoon from the camps and reads the letter he sent his parents after liberation.