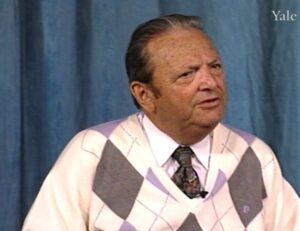 Joseph Berman who was born in 1921 in Poland. He describes immigration to Belgium in 1929; his childhood in a poor, Jewish district of Brussels; participating in Jewish, left-wing organizations including the Bund in Anderlecht; a tailor's apprenticeship; failed escape when Germany invaded; joining the Resistance; the role of the Association des Juifs de Belgique; forced labor in Dammes-Camiers; learning his mother and sisters had been deported; assistance from a driver in escaping with a friend; returning to his father and youngest sister in Brussels; obtaining false papers; working as a tailor; collecting information for the Resistance (Rote Kapelle); arrest on July 27, 1943; imprisonment in St. Gilles; and his registration as a Catholic by a helpful guard. Mr B. recounts improved conditions as a tailor; deportation to Esterwegen; harmonious relationships between prisoner groups (Freemasons, communists, and Catholics), which provided extra rations for youngsters; transfer to Ichtershausen prison in April 1944; evacuation to Pössneck; escape; hiding with non-Jews; liberation; first learning of mass exterminations while returning to Belgium; and reunion with his father and sister. He discusses many incidents in the Resistance, camps, and prisons and conveying to his sons his lack of Jewish identity.