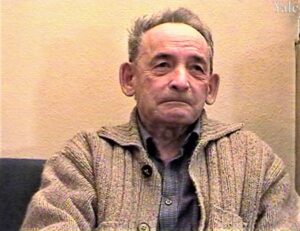 Jozef Blitz was born in Nowy Sącz, Poland in 1925, one of three children. He recounts his family moving to Antwerp in 1926; his parents' orthodoxy; attending a Jewish school, then one year of vocational school; participating in Maccabi; antisemitic harassment; German invasion; fleeing with his family to Dunkerque; returning via De Panne; his father remaining in France to work; anti-Jewish restrictions; deportation with his mother and sisters to Malines, then Auschwitz/Birkenau in September 1942; separation from his family upon arrival; slave labor in the swamps; hospitalization for two weeks; avoiding work for several weeks afterwards; privileged positions in the laundry, as a mason, in Canada Kommando, then the disinfection unit; public hanging of five prisoners who had attempted an escape in December 1945; hiding during the evacuation; liberation by Soviet troops; transfer to Kraków; assistance from the Red Cross; repatriation in April via Prague; learning the diamond trade; living in Israel from 1948 to 1949; marriage; and the births of five children. Mr. B. notes he is the only survivor of his immediate family; joining the Jewish community which helped him after his return; his stolen youth; the prisoner hierarchy; not sharing his story with his children; and returning to Auschwitz in 1995, the 50th anniversary of liberation. He shows documents.