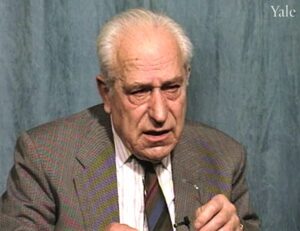 David Blum was born in Mielec, Poland in 1921 and raised in Jarosław. He recalls antisemitic harassment in public school; emigration to Brussels at age nine; no discrimination; assisting German-Jewish refugees; German invasion; leaving for France with his parents and brother; living in Bordeaux; fleeing to Montpellier upon German arrival; moving to Agde; his father's return to Belgium and subsequent deportation in 1942 (they never saw him again); joining Mouvement des jeunesses sionistes; organizing escapes for Jews to the free zone; being warned of his own arrest; non-Jews assisting him to escape; hiding for two weeks; obtaining false papers from the Jewish scouts (E.I.F.); learning of his mother's death; he and his brother living in a scout home in Polignac; arrest; escaping from Septfonds; fleeing to Italian-occupied Nice; being joined by his brother; working with the Jewish underground in Saint-Martin-Vésubie and Valdieri; arrest in Toulouse; incarceration in Noé; escape with a prisoner who recognized him from Armée juive; working for the Jewish resistance in Limoges; burning a building in Glénic to destroy records of Jews; military forays against the Germans; arrest; confessing to be Jewish, hoping to avoid execution as a Resistant; days of torture; deportation to Buchenwald, Dora, and Rottleberode; slave labor; and liberation from a death march in May 1945.