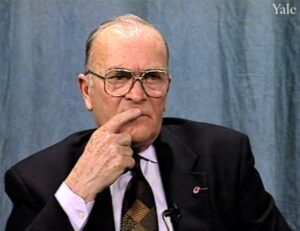 Charles Brusselairs who was born in Antwerp, Belgium in 1925. He recalls German invasion; joining the Resistance with his brother in November 1942; their denouncement and arrest in June 1943; his brother's release; imprisonment in St. Gilles and Essen; transfer to Esterwegen, then to Gross-Strehlitz, in January 1944; sabotaging production in a munitions factory; receiving Red Cross packages; recovering from a serious injury with assistance from a prisoner doctor; a trial at Opeln; transfer to Laband; celebrating Christmas; an unsuccessful attempt to escape from a death march; train transport to Buchenwald; observing the horrendous condition of Jewish prisoners from Auschwitz; clearing rubble in Weimar after Allied bombings; twenty-eight days on a train with no food; witnessing cannibalism; arrival at Theresienstadt; liberation; traveling to Prague, then Plzeň; repatriation in June 1945; a lengthy recovery in a sanatorium; and reunion with his parents. Mr. B. details camp life; the importance of other prisoners to his survival; intergroup relations, his state of mind, and singing to raise morale in the camps; serving as president of a survivor organization; sharing his experiences with his children; and the impossibility of conveying the reality of these events.