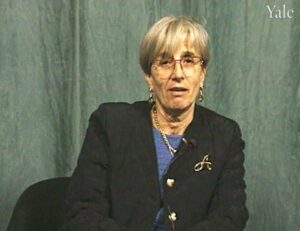 Alessandra Bucci was born to a non-Jewish father and a Jewish mother in Fiume, Italy (presently Rijeka, Croatia) in 1939, one of two sisters. She recounts never having met her father (he was a prisoner of war of the British in Africa); living in her maternal grandmother's home; her family's denouncement; their deportation to Risiera di San Sabba, then Auschwitz/Birkenau in 1944; separation with her mother and sister from her grandmother; being tattooed; assignment with her sister and cousin to a children's barrack; learning Czech and German; playing in the snow; cessation of her mother's visits (she thought she was dead); hospitalization; a block leader befriending her and her sister and advising them not to volunteer to join their mother; her cousin volunteering and disappearing (they never saw him again); liberation by Soviet troops; transfer to a Red Cross facility near Prague, then to a children's home in Lingfield a year later; learning her parents had survived; reunion with her mother in Rome; living with an aunt in Naples, then meeting her father in Trieste; marriage to a non-Jew; and the births of two daughters. Ms. G. discusses her inability to speak after the war (she was in shock); the importance of being with her sister to her survival; the warm atmosphere in Lingfield; participating in “This is Your Life” for her Lingfield caregiver; maintaining close contact with another Lingfield teacher; sharing her experiences with her children; she and her daughters identifying as Jews despite having raised them as Catholic; continuing sorrow over separation from her cousin; and visits to Auschwitz and San Sabba. Ms. B.'s sister participates in this testimony.