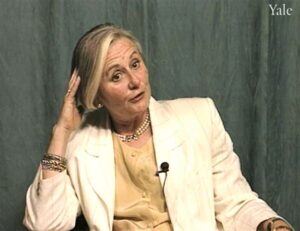 Liliana Bucci was born in Fiume, Italy (Rijeka, Croatia) in 1937 to a Jewish mother and Catholic father. She recounts living near her maternal grandmother, aunts, and uncles; being baptized (her younger sister and mother were too, as protection); her father's departure (he was in the Navy); a neighbor turning them (her mother, sister, grandmother, aunt, and cousin) into the Germans in April 1944; brief incarceration in Risiera di San Sabba; deportation to Auschwitz; her grandmother's disappearance; placement in a children's barrack with her sister and cousin; visits from her mother; learning Czech and German; playing in the snow; cessation of her mother's visits (she thought she was dead); the block leader in the next barrack befriending her and telling her not to volunteer to join her mother; her cousin volunteering and disappearing; liberation by Soviets in January; transfer to a Red Cross facility near Prague, then to Lingfield; a wonderful relationship with their caregiver and the other children; learning their parents were alive; a reunion with them in Rome in December 1946; not recognizing them; resolving their initial estrangement; and living in Trieste.