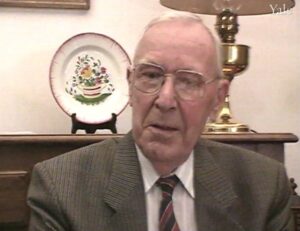 Theophile De Pauw, Catholic, who was born in Zoutleeuw, Belgium in 1918, one of two brothers. He recounts his father's death in 1933; enlisting in the military in 1938; mobilization in 1939; German invasion; capture as a prisoner of war; transfer from Ghent to Wissel, Herzberg, then Stalag 1A; forced labor in a factory, then on a farm; release in January 1941; returning to his family; joining a Royalist group, then the Resistance; burning crops planted for German use; organizing train sabotage; hiding Allied pilots and Jews who had escaped from transports; his mother distributing clandestine newspapers; arrest with a Jew he was hiding; incarceration in Breendonk; torture; slave labor building fortifications; constant fear and anxiety; release after two months; re-arrest en route to Brussels; imprisonment in Antwerp as a Jew; release several months later; returning home; continuing to work in the Resistance; liberation; and enlisting in the Belgian army. Mr. D. discusses the importance of praying and faith to his survival; his belief that collaborators were not sufficiently punished; nightmares resulting from his experiences; sharing his experiences with his children and grandchildren; and visiting Breendonk with them.