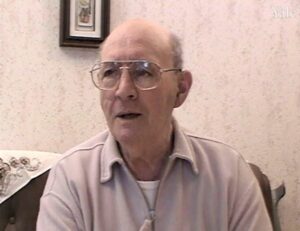 Hubert De Rocker was born in Ghent, Belgium in 1922. He recounts his parents' divorce shortly after his birth; placement in a foster home for twelve years, then with his father and paternal grandmother, both of whom were abusive; running away to his foster mother; placement with his biological mother; apprenticing as a butcher; working from age fifteen; German invasion; becoming unemployed; volunteering for work in Germany in early 1941; placement in Flensburg; returning to Belgium a few months later; returning to work in Germany in 1942; assignment to a meat factory; arrest for sabotage in 1943; forced labor in a prison; deportation to Auschwitz; a friend arranging his job as a butcher; befriending other prisoners, including Jews; organizing extra food; public hanging of Poles who had attempted to escape; he and his friend being beaten repeatedly when caught smuggling food; the wind carrying the odor of the Birkenau crematoria to Auschwitz; losing all faith in God; observing Jews praying in another barrack; a death march, train and ship transport to Mathausen, then Melk the next day; slave labor digging trenches; transfer about a month later to Ebensee; liberation by United States troops; repatriation to Ghent via Brussels; enlisting in the army; and serving for fifteen months. Mr. D. discusses relations between prisoner groups; focusing only on the present in the camps; and the importance of help from others to his survival.