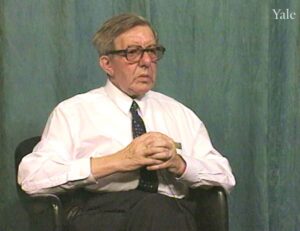 Marcel Deprez was born in Ans, Belgium in 1920, one of two children. He recounts his parents' staunch Catholicism; attending school in Liège; joining a socialist youth group in 1937; volunteering to fight in Spain; rejection due to his age, but working there with children in a refugee camp for two months in 1938; German invasion in 1940; fleeing with his brother to Aube; returning home; some of his friends wearing yellow stars to protest anti-Jewish measures; joining the Front de l'Indépendance; obtaining weapons; sabotaging phone and rail lines; his brother's arrest; going into hiding; arrest in 1944 for carrying false papers; incarceration in the Citadelle de Liège; interrogation and torture; pleading guilty to all charges at trial; transfer to Bergen-Belsen; hospitalization; transfer to Langenargen; slave labor in a factory; abandonment by German guards; traveling by bicycle to Erfurt; hospitalization; returning home; reunion with his girlfriend; brief arrest on suspicion of being a collaborator; convalescing in a sanatorium; reunion with his brother; completing his education; and continuing activities in support of his socialist ideology. He discusses political issues at length; the importance of keeping his autonomy and help from others to his survival; not sharing his experience with his daughter until she was nineteen; visiting Bergen-Belsen and other sites with her; planning to do the same with his grandson; and learning through archival research that his mother had participated in underground activities.