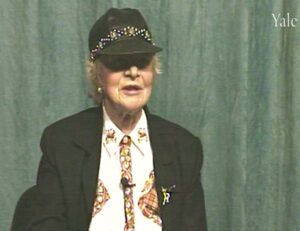 Juliette Demblon was born in Sougné-Remouchamps, Belgium in 1917. She recalls attending school in Aywaille, then boarding school in Liège; attending nursing school; marriage in 1938; German invasion; enlisting with the Belgian Red Cross; caring for the wounded; passing letters among French and English soldiers; returning home; working with the resistance; escaping through France to Spain with her mother and sister; arrest by Spanish police; expulsion to Saint-Gaudens (they had false French papers); joining a resistance group; smuggling people to Montauban and Spain; arrest in Madrid; six weeks imprisonment; a chaplain smuggling her to Portugal; returning to Spain to continue resistance work; traveling to Brussels with the Red Cross after liberation; learning her husband had died in Buchenwald and her mother and brother had been in concentration camps because of their resistance work; working in France with UNRRA; and marriage to a Jew. Ms. D. notes not discussing war experiences within her family.