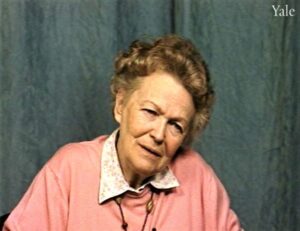 Andree Dumon was born in Uccle, Belgium in 1922, one of three sisters. She recounts living in Congo from ages four to ten; attending school in Uccle; German invasion; working with the Resistance in Brussels and Bruges; smuggling downed Allied aviators to Paris; obtaining false identity papers in Lille; hiding two children in the Ardennes; denunciation; arrest with her parents; imprisonment in St. Gilles in August 1942; deportation with her father in August 1943 (her mother was released); separation from him in Essen; transfer to Mesum, Zweibru?cken, then Gross-Strehlitz; slave labor in fields outside the camp; escaping with a friend; denunciation by locals; transfer to Ravensbru?ck; two women giving birth (the babies died); assisting a French Jewish prisoner; liquidation of most Jews shortly after they arrived; transfer to Mauthausen in February 1945; assignment to the quarry; a public execution; evacuation by the Red Cross in April 1945 to Saint Gall; repatriation; reunion with her mother; recovering from typhus; learning her father had been killed in Gross-Rosen; marriage in 1947; the births of two children; her daughter's death at age twenty-two; living in Venezuela for three years; and joining organizations for former Resistants and concentration camp victims. Ms. D. discusses relations between prisoner groups, particularly solidarity among the communists; attributing her survival to help from others and her optimism; continuing contact with some of the Allied aviators she had saved; nightmares and pervasive painful memories; testifying against the person who had denounced her; sharing her experiences with her children and grandchildren; and her sense of the importance of being a moral person.