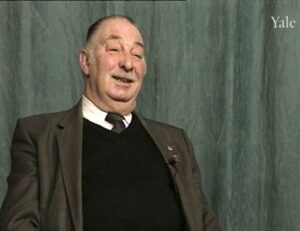 Alain Dubois was born in Pâturages, Belgium in 1925. He recalls attending school until 1941; working in a bakery; his older brother escaping to England after receiving a notice for forced labor; arrest in November 1943 in place of his brother; forced labor in Watten for Organisation Todt; observing French and Belgian camp officials and Slavic guards; his friend's shooting on his way to the latrine at night; observing a few Jews, but having no contact with them; increased rations, which they were not allowed to eat, during a Red Cross inspection; release in February 1944, promising not to reveal his experiences; arrest three months later; imprisonment in Mons; forced labor in Samer; and release after his mother died to care for his younger, handicapped brother. Mr. D. discusses brutal treatment of prisoners; not attempting escape, fearing retaliation on his family; having to argue to receive benefits because he was not in the resistance or a political prisoner; and leadership of an organization of deportees after retiring from the police in 1974.