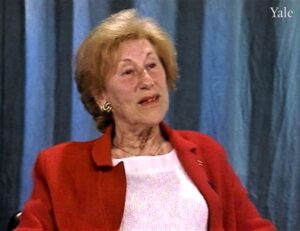 Jacqueline Esser was born in Cologne, Germany in 1921, an only child. She recalls her family's affluence; close relations with grandparents; emigrating to Strasbourg with her family in April 1933 after her uncle's arrest and torture; moving to Tours in 1934; her father's business success; relatives en route to the United States urging them to leave; her father's refusal; the outbreak of war; incarceration with her family in Gurs as enemy aliens; liberation in 1940; living in Limoges; moving alone to Grenoble; studying law; participating in the communist Resistance; obtaining false papers; her parents joining her; her father's death from illness; imprisonment in Lyon; torture by the Gestapo; deportation to Auschwitz/Birkenau in August 1944; slave labor breaking stones; avoiding selection with help from a communist; hospitalization; a death march in January 1945; transfer to Ravensbrück, then Neustadt/Glewe; a Red Cross visit; liberation; hospitalization; being diagnosed with tuberculosis; repatriation; reunion with her mother in Grenoble; recovering in sanatoria from June 1945 to November 1949; marriage; and her daughter's birth. Mrs. F. notes the importance of help from others, boosting each other's morale, and her Girl Scout experiences to her survival. She contrasts this with the attitude of only helping oneself leading to stealing bread from each other. She reads her poem about Auschwitz/Birkenau.