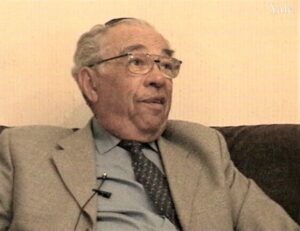 Maurice Fink was born in Sambor, Poland in 1923. He recounts moving to Belgium with his family when he was a child; his father's death; leaving school to help support his family; becoming a furrier; German invasion; fleeing to France with his mother and brother; their arrest; incarceration with his brother in Saint-Cyprien; their release due to his brother's musical talent; finding their mother in Toulouse; moving to a town near Agde, to Marseille, then Valras-Plage; arrest in summer 1942; incarceration in Rivesaltes, then Drancy; deportation with his brother to a camp in Germany, then ?azy (they never saw their mother again); slave labor building railroad tracks; beatings and starvation; he and his brother receiving extra food for singing Jewish songs; his brother saving him from deportation to Auschwitz; fasting on Yom Kippur; their close bond with another Belgian prisoner; transfer to Markstädt six weeks later; a kapo protecting them; receiving extra food from his civilian supervisor; transfer to Fünfteichen; separation from his brother and friend when they were transferred; receiving extra food from a French prisoner-of-war; making himself ill to avoid evacuation due to the resulting hospitalization; liberation by Soviet troops in winter 1945; traveling to Kraków, Katowice, Marseille, then Antwerp; an emotional reunion with his brother and friend; working in Brussels; marriage; his child's birth; moving to New York, then Philadelphia in 1951; and returning to Antwerp in 1957. Mr. F. notes the importance of luck to his survival and his twenty-year career helping children through a social center.