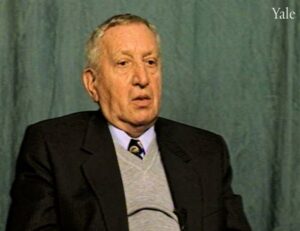 Max Finkelzstein was born in Poland in 1924, the second of five children. He recounts his family's move to Charleroi in 1929; attending public school; membership in Zionist organizations; moving to Brussels in 1938; apprenticing as a barber; German invasion in May 1940; fleeing with his older brother to Calais; returning home after encountering German troops; forced labor with two brothers in La Louvière, then another location; their escape and return to Brussels; learning their parents and sister had been deported (they never saw them again); placing their youngest brother in hiding; living on false papers as non-Jews; joining his older brother in the Resistance in June 1943; killing collaborators and blowing up buildings; arrest in May 1944; confessing he was Jewish, hoping for more lenient treatment; deportation to Malines, then to Auschwitz/Birkenau the next day; slave labor outside; transfer to the laundry, a privileged position, through Resistance contacts; sharing extra food with others; a death march, then transfer in open train cars to Mauthausen in January 1945; Czechs throwing them food en route; transfer to Melk, then Ebensee; slave labor and starvation; liberation by United States troops in April; prisoners killing brutal guards; repatriation via Linz; reunion with his three brothers; nightmares about his parents and sister; and marriage to a non-Jew in 1950. Mr. F. discusses not knowing about the gas chambers, even in Auschwitz/Birkenau; seldom sharing his experiences, even with his wife and daughter; and attributing his survival to prisoner solidarity and his will to live.