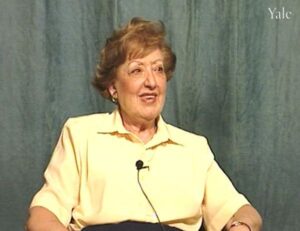 Mazaltov Hassid was born in Thessalonikē, Greece in 1921, the oldest of three children. She recounts attending a French school; her family's emigration to Brussels in 1930; marriage to a man from Thessalonikē in 1939; German invasion; fleeing with her family to Toulouse; her brother's escape to Spain, then Palestine; returning to Brussels; anti-Jewish restrictions; obtaining false papers; going into hiding with her family in 1942; arrest in July 1944; deportation to Malines, then to Auschwitz three weeks later; a Greek prisoner advising them in Ladino of survival strategies; separation from her husband and father; her sister frequently fainting due to her fear of the omnipresent rats; obtaining extra food from a Greek friend who was in the Canada Kommando; her sister's hospitalization; exchanging food for warmer clothing for her sister; pointless slave labor; transfer with her mother and sister to Wilischtal; slave labor in a munitions factory; a German providing medicine for her sister; train transfer to Theresienstadt; receiving Red Cross packages; liberation by Soviet troops; returning home via Liège; and reunion with her husband, father, and grandparents. Ms. H. discusses her persistent fear of death in the camps; her disadvantage because she did not speak Yiddish or German; visiting Thessalonikē in 1960; her continuing dislike of hearing German spoken; and a two-year depression when she was forty-one.