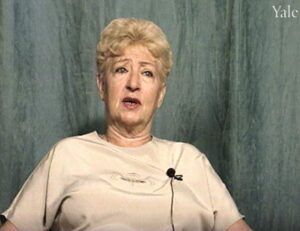 Odette Hassid was born in Thessalonikē, Greece in 1927, one of three children. She recounts her family's emigration to Brussels in 1930; attending school; German invasion; fleeing to Paris, then Toulouse; attending school; her brother fleeing to Spain, and ultimately to Israel; returning to Brussels; anti-Jewish restrictions; going into hiding with her family in November 1942; obtaining false papers; arrest in 1944; incarceration in Avenue Louise; transfer to Malines; deportation to Auschwitz; remaining with her mother and sister; hospitalization; avoiding selection with assistance from her mother and sister; working as a translator; their transfer to Wilischtal; slave labor in a munitions factory; transfer to Theresienstadt; receiving Red Cross packages; liberation by Soviet troops; United States troops moving them to Sokolov, then the Bamberg displaced persons camp; satisfaction upon denouncing SS soldiers to the authorities; traveling to Liège; returning home; reunion with her brother-in-law, father, and grandparents; and marriage. Ms. H. discusses her terror caused by the rats in Auschwitz; her stronger faith in God due to her experiences; a 1950 visit to Israel; not sharing her experiences; and disliking films about the Holocaust since they cannot convey the true horror.