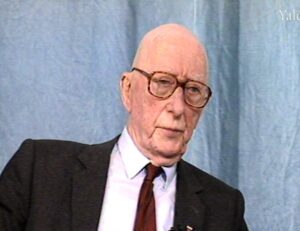 Arthur Haulot was born in Angleur, Belgium in 1913. He recalls his happy childhood; socialist activities; working as a journalist; marriage; his daughter's birth; German invasion; fleeing to Poitiers, then Toulouse; returning home in August; participating in the socialist Resistance; traveling to Paris as part of the Resistance; surrendering to save his family from arrest after a colleague was caught with his name; incarceration in St. Gilles; transfer to another prison where nuns assisted him; deportation to Mauthausen as a “Nacht und Nebel” prisoner; witnessing a guard strangling a Jewish prisoner; transfer to Dachau three months later; a friend obtaining a privileged position for him first as a cleaner and then as a head nurse; rivalries between communists and socialists; becoming the "representative" of Belgian prisoners; arranging with a camp official to share Red Cross packages with non-Belgian prisoners; undergoing a medical experiment; homosexuality among prisoners; liberation in April 1945; repatriation in June; his daughter not recognizing him; and attending Nuremberg and other war crime trials. Mr. H. discusses his relationship with Hendrik de Man; the importance to his survival of luck and a will to live; his relatively easy experience in Dachau; prisoners' loss of self identity in camps; the limitations of testimony since one can only convey one's own experiences and perceptions of them; nightmares resulting from his experiences; years of strained relations with his daughter; and writing poetry about his experiences.