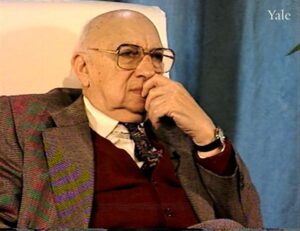 Eugène Heimans was born in Libau, Russia (now Latvia) in 1908. He describes moving to Belgium as an infant; growing up in Ghent; fleeing to England during World War I; his parents' deaths in the 1920s; marriage in 1935; living in Paris for two years; returning to Belgium; the outbreak of war; unsuccessful efforts to enlist in the Belgian military; joining the French Foreign Legion; returning to Belgium after the armistice; his wife's Resistance activities; supplying food to people in hiding or on illegal papers with her; his arrest; a few days imprisonment in St. Gilles; transfer to Breendonk; forced labor and beatings; six weeks in a military hospital in Antwerp; assistance from a German doctor; and transfer to Auschwitz via Plauen. He recalls work in a factory; close relationships with a French woman and the rabbi of Strasbourg (he led others in prayer); the death march; transfer to Mauthausen, Melk, and Ebensee; liberation by United States troops; and returning to Belgium via Linz. Mr H. recounts finding work; divorce and remarriage; and his son's birth. He discusses his sense of isolation and the importance of his few French-speaking friends in the camps.