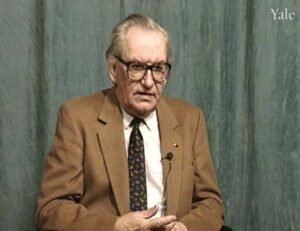 Joseph Hinck was born in Paliseul, Belgium in 1917, one of two sons. He recounts his mother's death in 1921; living with an aunt in Bastogne; attending school in Boullion (his neighbor was Léon Degrelle); living in Sugny; enlisting in the military in 1936; assignment to barracks in Liège; marriage in June 1939; German invasion; his wife fleeing to England; brief capture as a prisoner of war; returning to Antwerp; recapture; forced farm labor in Meldorf; release; joining his father in Bastogne; repairing radios to provide access to the BBC; hiding members of the Resistance and escaped French and British POWs; being warned his arrest was imminent; fleeing to Paris; joining the Resistance; transmitting coded messages; arrest in March 1943; incarceration in Fresnes; interrogation and beatings; praying in his cell; deportation to Neuenbremme six months later; receiving a Red Cross package; befriending a Jewish prisoner; assisting Jews (they were treated more harshly); transfer to Mauthausen eight days later in September 1943; separation of Jewish prisoners; a privileged assignment doing errands; friendship with an English prisoner; building a wall with him so that it would later collapse; the Communists organizing extra food for the weakest; transfer to Schwechat in January 1944; slave labor in an airplane factory; return to Mauthausen in June; hospitalization; transfer to Natzweiler-Struthof, then Dachau; hospitalization; liberation by United States troops; repatriation with Red Cross assistance; reunion with his father and brother; his wife's return; divorce; and remarriage in 1958. Mr. H. discusses survival strategies; relations between national groups and the camp hierarchy; an eating disorder and hostility toward Germans due to his experiences; sharing humorous stories with fellow prisoners, who remain close friends to the present time.