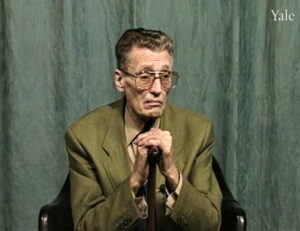 Louis Hollanders was born in Louvain, Belgium in 1919, one of four children. He recounts attending school; working at the University of Louvain; enlisting in the military in 1939; German invasion; retreating to Brussels; capitulation; returning home; joining the Resistance (learning after the war it was directed by Sûreté de l'État); spying on German military construction in Beauvechain; delivering weapons and information to his contacts; denouncement; his family's arrest as hostages; surrendering in March 1941 to obtain their release; incarceration in St. Gilles; interrogations and beatings; transfer to Lübeck, Hamburg, then Charlottenburg; a sham trial; imprisonment in Lehrterstrasse; transfer to Tegel; solitary confinement, except occasionally attending Mass, his only contact with others prisoners, including a Jew; another prisoner giving him wires and telephone parts from which he built a radio receiver; punishment when it was discovered; being forced to make brushes in his cell; sabotaging the process; transfer to Breslau, Neutitschein, then Dachau in September 1944; becoming very weak and ill; liberation by United States troops; Soviet prisoners killing a guard; hospitalization; repatriation to Brussels; assistance from the Red Cross; hospitalization in Anderlecht; a hero's welcome home; marriage in 1949; and the births of three children. Mr. H. discusses relations between national groups in prisons and Dachau; suffering more from isolation than hunger, despite his sense of developing intellectually from the isolation; never fully recovering his health; and nightmares resulting from his experiences.