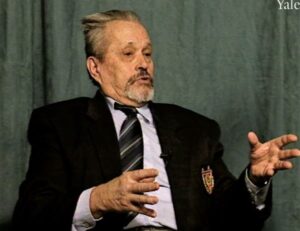 Willy Knappen was born in Mont-sur-Marchienne, Belgium in 1920, a non-Jew. Mr. K. recalls participating in a Protestant youth group; leaving school at age fifteen; working odd jobs; learning to be a baker from his father; military enlistment in September 1938; assignments in Florennes, Konigslo, Rossignol, and Bruges; a futile attempt to leave with British troops after German invasion; volunteering for the bakery when he was incarcerated; transfer to a prison in Bruges; escape; traveling to Brussels, then his home; joining an organization of war veterans; contacting a partisan group; blowing up bridges, railroads, and other strategic sites; deportation for forced labor to Stolberg in 1942; a serious burn incurred while working; hospitalization; transfer to Charleroi; transfer to several prisons, ending at Mons; deportation to Watten; always thinking of escaping; twelve hour shifts at harsh labor; starvation rations; escaping during an Allied bombing; walking to Watou; a local civilian giving him food and money; traveling by train to Brussels, then Charleroi; hiding for two months; learning the Germans counted him among the dead; continuing resistance missions including destroying rail and communications lines; living on farms in Goze?e and Nalinnes; returning their weapons when the war ended; continuing his military career; marriage; moving to Congo for several years; and returning to Brussels. Mr. K. notes he and his father helped transport fleeing Jews; sharing parts of his story with his children; and nightmares about World War II, but not Congo.