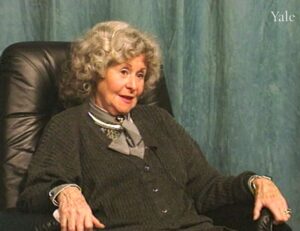 Hélène Kohn was born in Vienna, Austria in 1925, an only child. She recounts antisemitism after the Anschluss; her father's arrest; his departure for Antwerp; illegally entering Belgium with her mother to join him; attending a Flemish school; fleeing when Germany invaded in 1940; arrest in Tournai; release with her mother; going to Brussels; learning her father had been killed by Belgian soldiers as a suspected spy; hiding with non-Jews; deciding not to enter a Catholic institution, not wanting to be separated from her mother; distributing leaflets for the underground; exposure as Jews; arrest; deportation to Malines, then Auschwitz/Birkenau; slave labor outside the camp; the smell of burning flesh; transfer to Ravensbrück; slave labor in a munitions factory; a death march; liberation by Soviet troops; and return to Belgium. Ms. K. discusses repressing most of her memories; inter-group relations and using tobacco as currency in the camps; focusing herself on her mother, thus numbing herself to everything else; and not wanting to burden her son with her experiences.