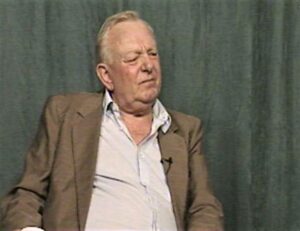 Siegbert Krygier was born in Berlin, Germany in 1921 to Polish emigres. He recounts his family's return to Poland and immediate emigration to Brussels; speaking Yiddish, Polish, and Russian at home; the births of two sisters; his father establishing a business; his bar mitzvah; German invasion in 1940; efforts to enlist and rejection as a non-Belgian citizen; obtaining papers as non-Jews for himself and his sisters; joining the Front de l'Indépendence Resistance; hiding his youngest sister with non-Jews; his parents refusing false papers; their deportation in 1942 (they did not survive); forging currency and false papers for the Resistance; escaping arrest twice; being warned by friends to leave; obtaining a new identification; traveling to Lyon, then Annemasse; joining the French Resistance; arrest a year later in Aix-les Bains; incarceration in Compiègne; identification as a Jew; transfer to Drancy, then Auschwitz/Birkenau; a friend providing extra food; slave labor in Monowitz; a friend advising him to volunteer as a mechanic; working for I.G. Farben, then for Todt; a death march to Gleiwitz; train transfer to Buchenwald; non-Jewish friends sharing Red Cross packages; self-liberation in April 1945; arrival of United States troops; repatriation to Belgium six weeks later; depression; assistance from the Joint; reunion with his sisters; not sharing his experiences with them, marriage to a Malines survivor in 1948; and raising their children as Jews. Mr. K. discusses continuing medical problems resulting from his experiences; receiving less Belgian compensation as a Jewish deportee than non-Jewish deportees; hostility toward Germans and Poles; and believing that humankind has not learned anything from history.