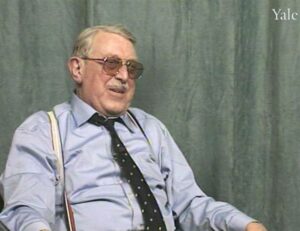 Adolphe Lheureux was born in Fumal, Belgium in 1919. He recalls that his family were very religious Christians and Belgian patriots; attending school in Huy; military enlistment in 1938; German invasion; fleeing with his battalion to France; sailing from La Turballe to England; enlisting in the Special Operations Executive (SOE) to continue to fight against Germany; months of physical and intelligence training; parachuting into Belgium in fall 1941; reunion with his fiancée and family; living in Liège; condemning the treatment of Jews based on his Christian beliefs; organizing a sabotage group; retrieving supplies; hiding when one of his men was captured; killing a German policeman; capture in April 1942; imprisonment and being handcuffed night and day, in the Citadelle de Liège for four months; interrogations; transfer to St. Leonhard, then fifteen days later to Bochum; designation as a "Nacht und Nebel" political prisoner; transfer eight months later to Esterwegen; listening to a clandestine radio; transfer to Ichtershausen; slave labor in a munitions factory; evacuation to Pössneck; escape; liberation by United States troops; traveling to Weimar; repatriation to Brussels; and debriefing by the SOE. Mr. L. discusses the importance of faith to his survival; his efforts to raise morale in the camps; intergroup relations; not sharing his experiences with his children, fearing he would transmit his hatred; giving up his hatred after some years; sharing his experiences with his grandchildren; and pervasive painful memories.