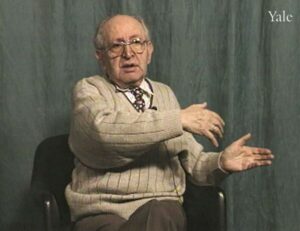 Haïm Lichtman was born in Szreńsk, Poland in 1923, one of six children. He recounts moving to Mława when he was about four; his family's poverty; their move to Iłowo; antisemitic harassment at public school; his mother visiting her family in Szreńsk with the four younger children; German invasion in September 1939; joining his mother and siblings with his brother and father; his father's return to Iłowo with his younger brother to retrieve belongings; his father's murder by Germans en route; anti-Jewish restrictions; round-up for forced labor in Ciechanów; returning home; his youngest brother's death in his arms from illness; transfer with his family to the Mława ghetto in December 1941; the marriages of two cousins; deportation with his family to Auschwitz in November 1942; separation from his mother and sister; encountering a cousin; transfer to Buna/Monowitz which resuled in separation from his brother; slave labor for IG Farben; hospitalization in January 1943; surgery on his leg; a German prisoner caring for him; assignment to a privileged position recycling clothing of murdered Jews; trading valuables he found for extra food that he shared with his friend and other prisoners; encounters with English and Soviet prisoners of war; his brother sending him a sweater; a death march, then train transfer to Dora in January 1945; losing his friend en route; slave labor in a munitions factory; public hangings; transfer to Bergen-Belsen in April; liberation by British troops; leaving three weeks later; traveling in Germany; debarking from a train in Liège; remaining there; marriage; locating his brother through the Red Cross; and their reunion. Mr. L. discusses many details of camp life; nightmares and health issues resulting from his experiences; sharing his story with his children and grandchildren; visiting Szreńsk with his son; and the importance of luck and assistance from others to his survival.