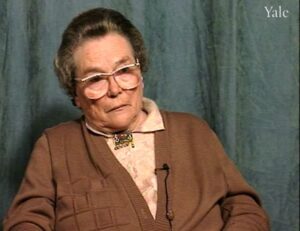 Elisabeth Liegeois was born in Etterbeek, Belgium in 1913. She recounts her father's World War I military service; her mother leaving her to find him in France; joining her mother near Paris in 1916; returning to Belgium in 1918; her parents' divorce; living with her mother; working as a secretary/accountant; distributing anti-German materials in Brussels in 1940; assisting downed Allied pilots through the Resistance; betrayal of their unit; arrest on February 20, 1943; nine months incarceration in St. Gilles; a death sentence in May; deportation to Germany as a "Nacht und Nebel" prisoner; imprisonment at Aachen for a month; transfer to Hof, Waldheim, Cotbus, then Ravensbrück; moving from a tent barrack to a building; slave labor sorting clothing and household goods; finding warm clothing which saved those who wore it; the deaths of thirty of their group in the first month; no solidarity except within her group; hospitalization when she was ill; discussing food and recipes; transfer to Mauthausen; observing cannibalism; liberation; Red Cross assistance; recuperating in Switzerland and Paris; and repatriation. Ms. L. discusses surviving because of her ability not to give up; not discussing the camps, even with camp friends; and learning of the Holocaust only after the war.