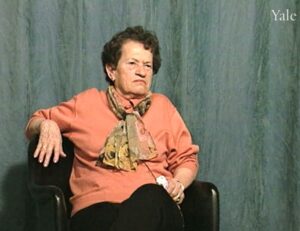 Yolana Lieberman was born in Holubyne, Czechoslovakia (presently Ukraine) in 1927, a twin, and one of nine children. She recounts her father's death when she was about two; cordial relations with non-Jews; learning Yiddish in Svaliava; two sisters emigrating to Belgium; living with a sister in Svaliava; Hungarian occupation in spring 1944; deportation to the Munkacs ghetto weeks later, then to Auschwitz/Birkenau; separation from her sister; a brief encounter with her twin and another sister; assignment to Canada Kommando; throwing food and clothing that she had smuggled over a fence to her sisters; reassignment to a weaving factory, then snow removal; transfer to Bergen-Belsen, then Venusberg; a friend arranging transfer to her barrack; volunteering to bury corpses for extra food; assistance from a Hungarian guard; transfer to Mauthausen; liberation by United States troops the next day; traveling to Bucharest, then home seeking relatives; reunion with two brothers; assistance from the Joint; reunion with a sister and another brother; contact from her sisters in Belgium; moving to Prague; emigration to join her sister in Belgium in August 1946; emigration to join her brothers in Israel in 1949; marriage to a man from Munkacs; her daughter's birth; returning to Brussels in 1957; divorce; remarriage to another survivor in 1970; and his death. Ms. L. discusses loss of hope in the camps; nearly 100 relatives who were killed; continuing nightmares and depression; and sharing her experiences with her daughter and grandchildren. She shows photographs.